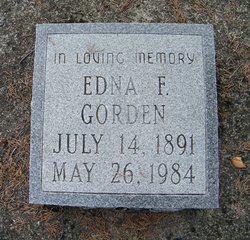 Born in Utah in 1891, Edna Frances Cobb Gorden (nee: Carpenter) moved to Cloverdale around 1920 with her first husband, Nelvin Cobb. From the time she arrived until her death in 1984, Edna was a shining star in the community and her accomplishments were many and varied. Her husband, a mortician, was Rotary Club of Cloverdale President in 1928 and served as Mayor from 1925 to 1933.

Edna was an accomplished musical actress who not only studied dance, she gave lessons. Her students were known for the beautifully costumed dances they performed for the annual Citrus Fair. For seven years, she also played first violin in the Santa Rosa Symphony Orchestra. After she and Cobb divorced, she married George Gorden, a lineman for the telephone company, in 1936.

A natural student, Edna had made a study of undertaking and embalming, not because she expected to make use of it, but because she had the opportunity and wanted to understand more. Little did she realize this would become her profession.

The Edna F. Gorden Funeral Parlor, with its furniture store up front, was located at 231 N. Cloverdale Blvd. Under appointment by then-coroner Fred Young of Healdsburg, she was a deputy county coroner, qualified to conduct
inquests and perform other work of the office. One of the first female morticians in the Western United States, she served the Cloverdale community for more than 35 years. She wrote historical articles for the Cloverdale Reveille and her hand-written Funeral Records can be found at the Cloverdale History Center.

After WWII, Edna received an award from the Marine Corps for providing information on ship movements vital to national security as the war began. According to the 1940 census, Edna only had an 8th grade education. Can you imagine a mortician today who didn’t even have a high school diploma?