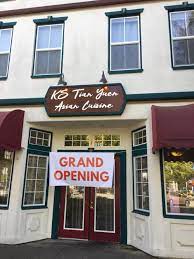 KS Tian Yuen Restaurant, A Garden For All by Michele Armanino

One Friday afternoon I sat with Mei Jung Shih, proprietor of the KS Tian Yuen Restaurant, located on S. Cloverdale Blvd, to learn more about her life and success as a restaurateur. Amidst a bustling, brightly lit room, focused chefs and wafting fragrances, her story evolved.

Mei, her husband, Ming Cheng Kuo and her two children arrived in the States in 2004, and opened a buffet in Santa Rosa. In 2007, smitten with the similarities between the Cloverdale mountains and the majestic mountains in Taiwan, the family relocated to Cloverdale and launched, with the aid of extended family, KS Tian Yuen Restaurant (followed in 2018 with a Tian Yuen in Windsor.) Mei translated the Chinese words, Tian Yuen, to mean “garden for the world” and genuinely remarked that everyone is included in her restaurant.

Mei studied Chinese medicine in Taiwan, her native home, at a community college for two years where she learned about the ancient healing art of Chinese herbalism. This knowledge was the impetus for her desire to open an Asian Fusion restaurant (a blend of at least two Asian cuisines) that is exceptional in its quest to nourish body and soul. With endless experimentation, Mei created a cuisine unique to Tian Yuen.

Fruits, such as Tamarind, known for its medicinal properties, vegetables, and proteins are carefully selected by Mei to create harmonious, healthy dishes. Steam cooking allows the natural flavors of the ingredients to emerge and oil isminimally used, resulting in a light and fresh cuisine. Mei’s own creation, chicken rice rolls, are a beloved after school snack by Cloverdale High School students because they are affordable, healthy and delicious. Beverages include, local Pedroncelli Wines and hot and cold sakes. Mei demonstrated how a popular sweet after dinner drink is made by mixing cold sake with plum wine. Hot sake, she pointed out, is an excellent pairing with sushi since it is also made from rice.